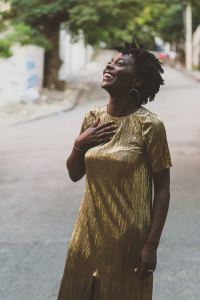 Nathalie Joachim is a Grammy-nominated flutist, composer, and vocalist. The Brooklyn born Haitian-American artist is hailed for being “a fresh and invigorating cross-cultural voice”. (The Nation). She is co-founder of the critically acclaimed duo, Flutronix,  and comfortably navigates everything from classical to indie-rock, all while advocating for social change and cultural awareness. Her authenticity has gained her the reputation of being “powerful and unpretentious.” (The New York Times)

Ms. Joachim, a United States Artist Fellow, has performed and recorded with an impressive range of today’s most exciting artists and ensembles, including Miguel Zenón, Bryce Dessner, and the International Contemporary Ensemble, and is the former flutist of the contemporary chamber ensemble Eighth Blackbird. As a composer, Joachim is regularly commissioned to write for instrumental and vocal artists, dance, and interdisciplinary theater, often highlighting her unique electroacoustic style. Upcoming premieres include Joachim’s symphonic debut commissioned by St. Louis Symphony and the In Unison Chorus; new large scale chamber works for Roomful of Teeth, So Percussion, and Fuse Ensemble; a micro-chamber opera commissioned by Boston Lyric Opera; and a site-specific performance installation commissioned for Yale University’s Schwarzman Center.

Ms. Joachim has appeared as a featured performer on stages throughout the United States, Europe, Australia, and Japan, including performances at Carnegie Hall, the Big Ears Festival, Newport Jazz Festival, The Kimmel Center, Davies Symphony Hall, Alice Tully Hall and more. Her performances and compositions are regularly broadcast on NPR, WFMT, WBEZ, BBC Radio, WNYC, WQXR, and she has been featured in television segments on BBC World News, Saturday Night Live, and the Late Show with David Letterman, among others.

As an active educator of students of all ages and skill levels, Ms. Joachim is devoted to supporting music education with intention. She holds faculty positions at The Hartt School at The University of Hartford, the Bang on a Can Summer Festival, the Perlman Music Program and the Gabriela Lena Frank Creative Academy of Music. She also serves as a mentor for The Juilliard School’s BluePrint Fellowship with National Sawdust and the Banff Centre for Arts and Creativity. Her youth education workshops, presented internationally with Flutronix in partnership with The Juilliard-Nord Anglia Performing Arts Programme, focus on creative collaboration and igniting the spirit of composition in young people. Her work focused in this realm has led to innovative educational initiatives, including the 2020 release of Transformation, an album co-created with students at New York City’s Special Music School High School as part of an artist residency through the Kaufman Music Center.

Ms. Joachim makes regular appearances as a guest lecturer and visiting artist at notable institutions, including recent presentations for the University of Michigan, Los Angeles Philharmonic’s Composer Fellowship Program, Oberlin Conservatory, University of North Carolina School for the Arts, and New York University among others.  Joachim is an alumnus of The Juilliard School, where she studied flute performance, and The New School, where her focus was audio production and sound design.