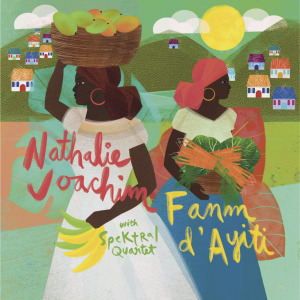 “They have everything: a supreme technical command that seems to come easily, a capacity to make complicated music clear, and, most notably…an ability to cast a magic spell”
– New York Times on Spektral Quartet

Haitian-American composer, flutist, and vocalist Nathalie Joachim will release her debut solo album, Fanm d’Ayiti, on August 30, 2019. The album, which translates to Women of Haiti in English, shows Joachim exploring her Haitian heritage and celebrating the songs and stories of some of Haiti’s most iconic yet under-recognized female artists. The songs on Fanm d’Ayiti were all written or arranged by Joachim and feature her performing on vocals, flute, and electronics alongside the Grammy-nominated string ensemble Spektral Quartet.

The album will be released in digital and vinyl formats, and is available for pre-order now through Bandcamp, iTunes, and Amazon. Information below on performance dates supporting the project, including the New York City premiere of the work at Kaufman Music Center’s Merkin Hall on October 26 as part of the 10th Annual Ecstatic Music Series; Joachim will also be an artist-in-residence at Kaufman Music Center this fall. Additionally, Joachim is known for her work as a flutist and co-artistic director for Eighth Blackbird, and co-founder of flute duo Flutronix.

Stream the opening track “Papa Loko”, a traditional Haitian song arranged by Joachim, here. The song depicts the beauty and light of the vodou god Papa Loko, and is a way for Joachim to pay tribute to Toto Bissainthe, whose rendition of this song she cherishes. The piece ends with the great Emerante de Pradines giving one of the last interviews of her life before passing away in early 2018.

“She and I spent many a cherished moment underneath the mango and coconut trees in her yard in Haiti – and in my childhood home in America – singing songs with one another. It was our way of telling each other stories, and her way of passing on a centuries-long cultural practice of oral history. Her absence ignited a deep desire for understanding in me. In what ways did our voices connect with the voices of other Haitian women? What did our songs tell us about our past, and what might they mean for the future? The foundation ofFanm d’Ayiti began to reveal itself readily through conversation: with my family, and with others willing to share their piece of our cultural puzzle.”

These exchanges led Joachim to learn about and honor the dozens of Haitian female artists who were each committed to carrying forward the story of the first free black republic, who used their voices to uplift future generations by celebrating the nation’s strength.

“I feel lucky to be joining my voice with theirs,” continues Joachim, “and bringing listeners a sonic portfolio of my originals and arrangements of historic Haitian songs, woven together in a musical celebration of activism and hope.” 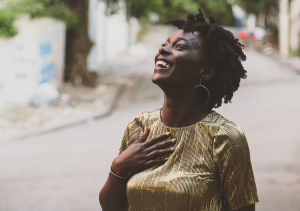